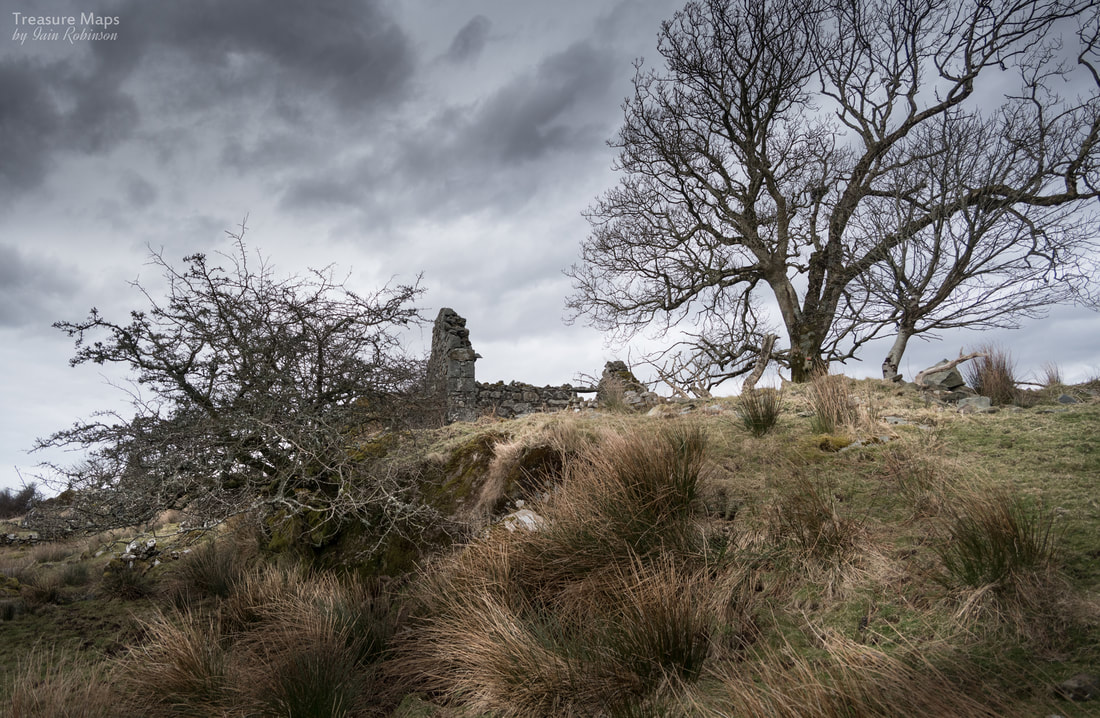 ​The ruined village with a dark secret...
​
I first noticed Cil Drysgwr when we were wandering about on the west side of Cwm Pennant. We'd been having a look at the remains of Castell Caerau, on the rocky slopes of Craig-y-Garn. It's an iron age fort, but looks more like a collection of random dry-stone walls- still mindblowing, nevertheless, to think that the rocks were put in place by the hands of our distant ancestors.

Bryncir Tower, in the middle left. Immediately above and to the left are the ruins.
​As Petra and I walked away along an old quarry road, I noticed that there was a good view of Bryncir Tower in the distance, so I stopped to take a few views. Later, when I got the photos on the computer, I zoomed in and saw something interesting- an intriguing set of ruins in the background. I opened up Google Maps and sure enough, there were several settlements marked underneath an escarpment to the east of the tower. It was probably a line of hard rock that the glacier had passed over, leaving a roche moutonee- ideal for homesteads to shelter beneath, plus there would have been a supply of building material.
Old maps, found on the NLS web site, seemed to indicate that the settlements were of differing ages, the oldest being directly above the ridge, called Cil Drygwr. I'll detail how to find your way to these places later, but for now, I'll get straight to the interesting bit.

We've made several visits to the village, all in winter. Some days were overcast, but the weather lent a great deal of atmosphere to the settlements, which were hugely intriguing. I had translated Cil Drysgwr to mean "Satan's Nook"...which was eerie enough, but while exploring, we met the farmer, Aled, a real gentleman, who gave me some food for thought. He reminded me that Welsh is not always a strictly literal language; there is considerable leeway for nuance- and that hereabouts, the settlements are known as the "Bandit's Lair". 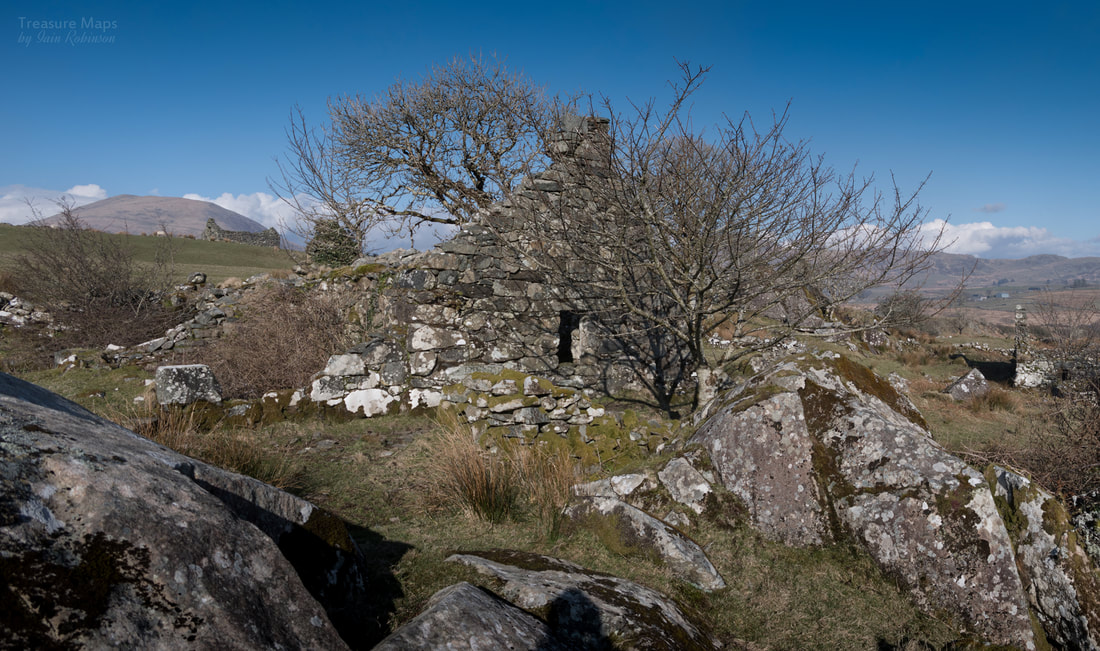 One of the houses, which are built into the rock at the top of the cliffs in this instance. Hebog looms in the background.
Apparently, in the C17th, this settlement was a Welsh version of the Hole in the Wall Gang's hideaway. A ruthless bunch of desperados made this village their home, and used the nearby eminence of Craig-y-Gesail as a lookout, to spot likely victims coming from the south, or Militia Men coming from Caernarfon. They terrorised the area for many years, until being rooted out.  I wondered how the people in the nearby farms and smallholdings coped with having bandits for neighbours, the C17th in this area must have been rather interesting!
​
And yet, the place had a very calm, benign atmosphere about it. I felt that there had been happiness and laughter here, many years ago. There was evidence of a system of leats and drains for water and some of the structures looked like they had been occupied until the early C20th. The land here belongs to Lord Harlech, so perhaps he took over the land, imposed some order and rented these homes out to ordinary farming folk.​ They are the most picturesque ruins I have seen, set atop a steep escarpment, richly wooded with oak and hawthorn.

Despite the wonderful oakwoods that dotted the slopes, there were a number of grand old Ash trees that had grown up within, or beside the structures. I was sad to think that this would probably be their last year, many were showing advanced signs of Ash dieback. Their wonderful profiles will be missed in the landscape, especially in Wales. 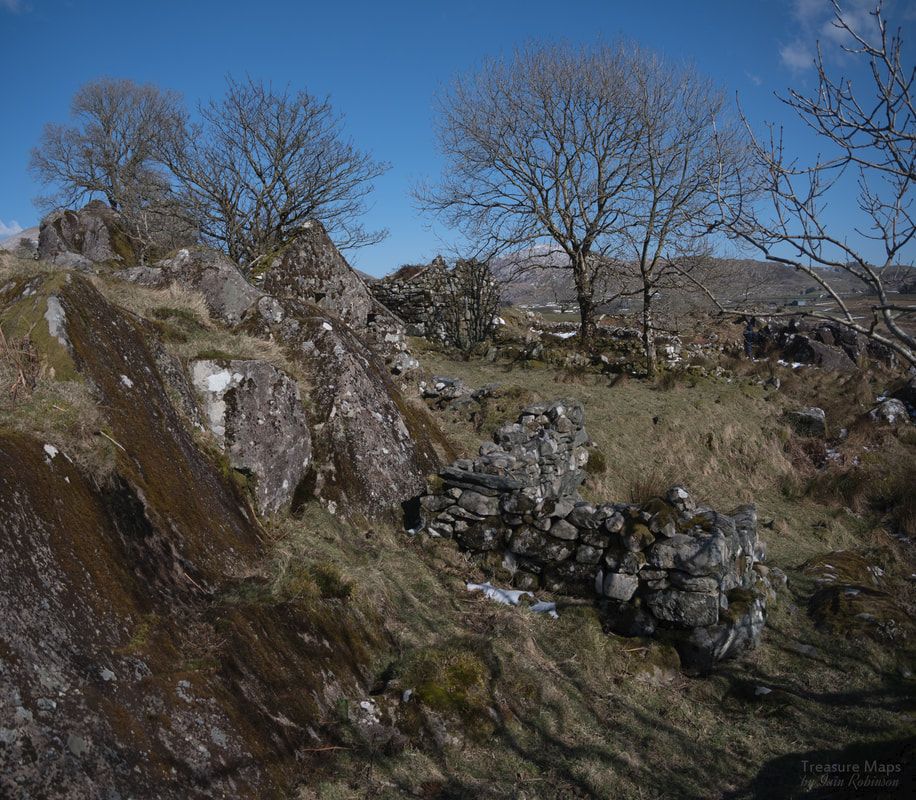 A view from the latrines of the eastern half of the village. As can be seen, several structures were built directly into the rock...it must have saved on materials and effort! 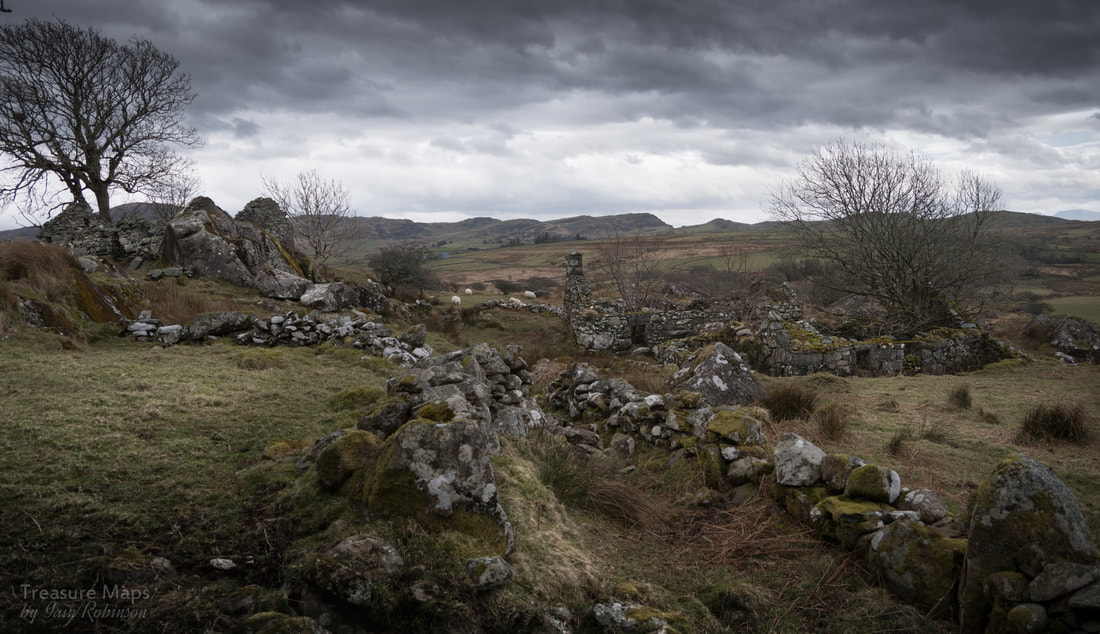 A view from the "street" which runs through the village, linking the buildings. In the distance are the hills above Tremadoc.
The Neighbours
​
From Cil Drysgwr it is possible to look north east and see the imposing ruins of Ty  Mawr, the Gorseddau slate mill. To the west are a number of no less fascinating ruins. The first is Pen-y-Clogwyn, (the head of the cliffs) which seems as old as any of the other structures on the ridge. There's a barn and a couple of outbuildings, plus some buried steps and the remains of a road.
A substantial wall blocks the way east, towards Cwm Pennant. This is the estate wall which divides Harlech's land from the Bryncir estate, (once owned by the Huddarts, those rather foolish toffs who thought mining was a matter of digging a hole and throwing money down it). A fine stile is built into the wall, on the line of the footpath, allowing access to the next ruin along the escarpment.

The hill in the right distance is Craig y Gesail, where lookouts would watch for trouble. 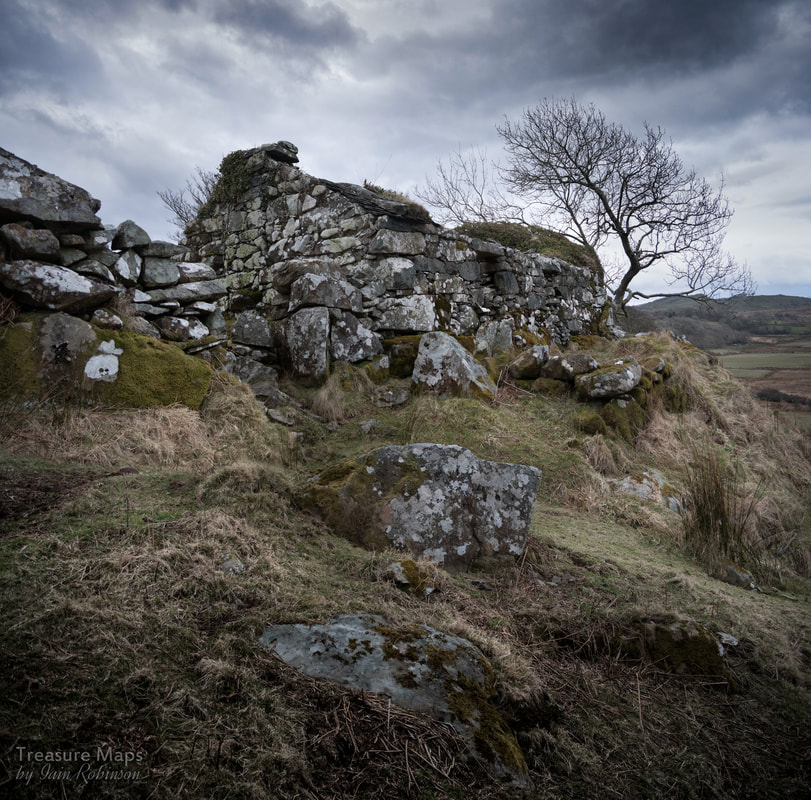 The imposing ruins of Pen-y-Clogwyn, to the west of Cil y Drysgwr. Look at the size of the blocks it is constructed from! 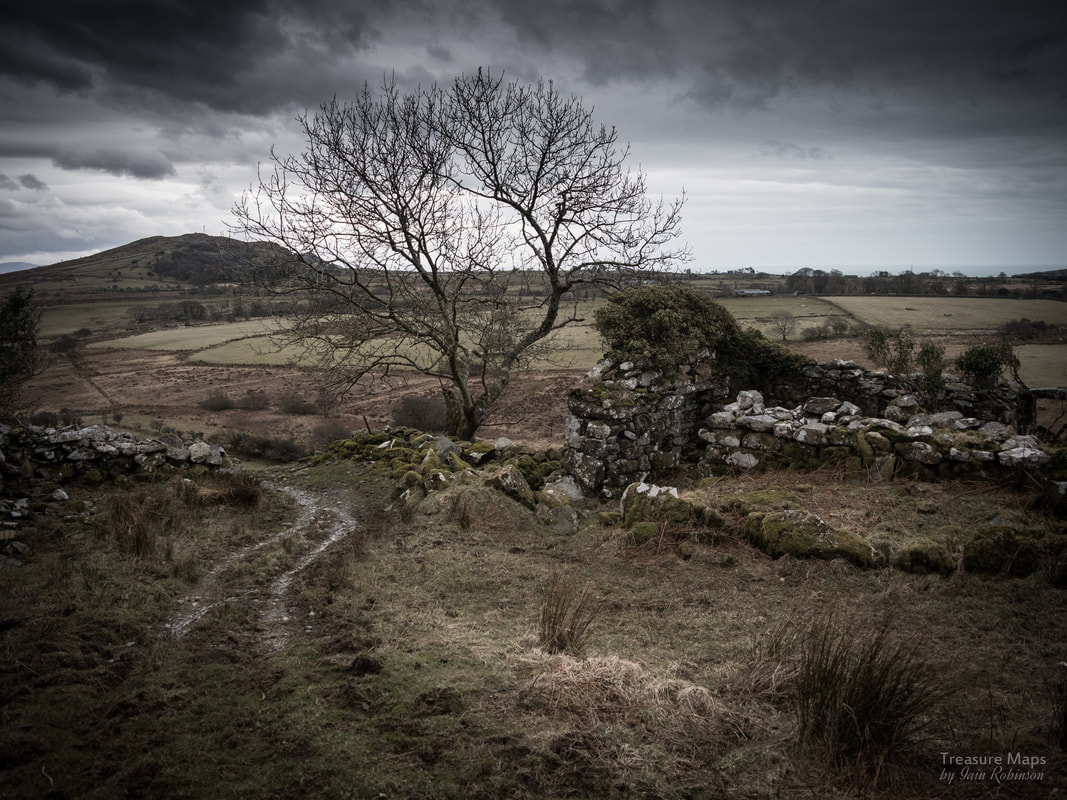 Above Pen-y-Clogwyn, showing the imposing view this place would have had across the country between Garndolbenmaen and Tremadoc.
Cae-du, a sad place

Here there was a small house of some age, probably early victorian, which had been destroyed by a tall oak tree falling on it in recent years. I don't know why it hadn't been repaired, perhaps it was considered to be too badly damaged, as the tree had taken out a good portion of the structure. It still had much evidence of the last occupants, but the saddest thing was how someone had tried to make the garden nice with borders and vegetable plots. Repairs looked to have started, but had stalled for some reason. Behind, the woods on the escarpment grew ever more thickly, the oaks roaring in the wind. The sheep wandered around apologetically in the chill wind- we didn't want to hang about here, it seemed too full of painful memories.

Cae-du (black field) showing very plainly the damage wreaked by the falling tree. Behind me here, a tall beech tree had fallen.
All in a row

A little bit further along what now had become a farm road was a line of buildings called Tai-newyddion (the new houses) which seemed to have been built as farm workers cottages at some time in the middle of the 1800s. Now ruinous, they had obviously been well-appointed, with privies at the back and pig sties. These were what I had seen originally, when looking out across the valley from Castell Caerau. There must have been quite a community here at one time, all working for the Bryncir Home Farm. Now, they were slowly sinking back into the land, although some had been used as impromptu stores by the farmer and were now full of rubbish. 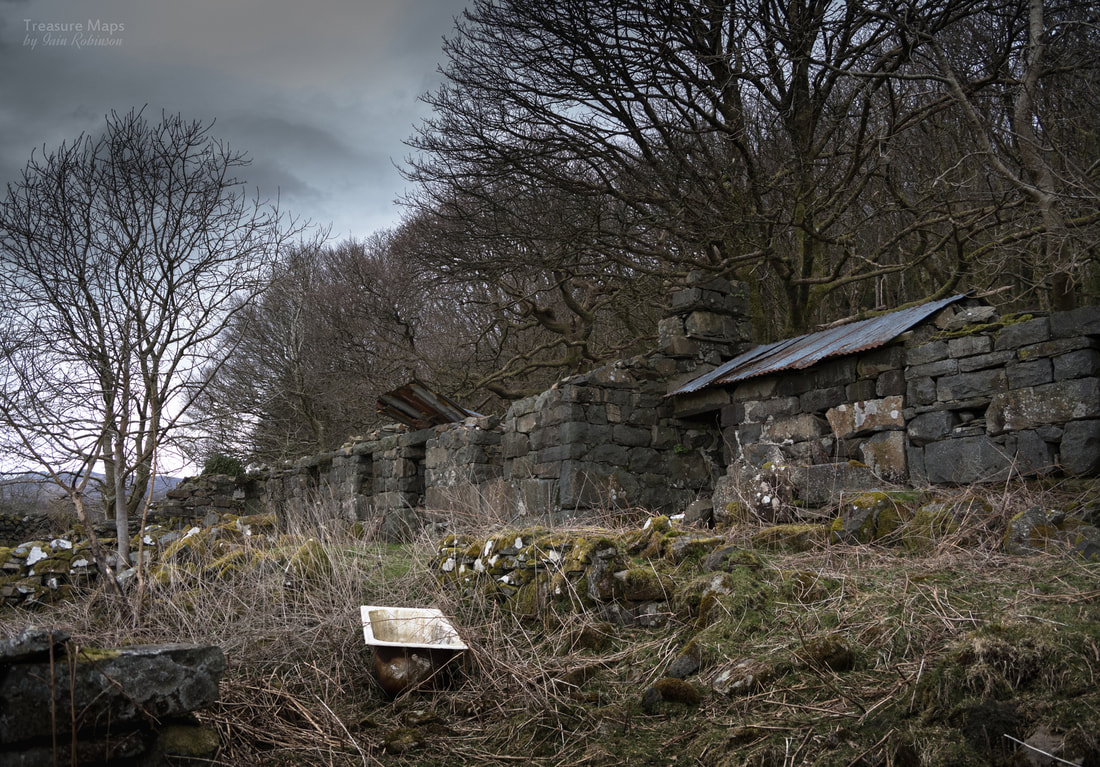 A fine example of a feral bathtub outside Tai newyddion. Does this mean that these buildings had baths? 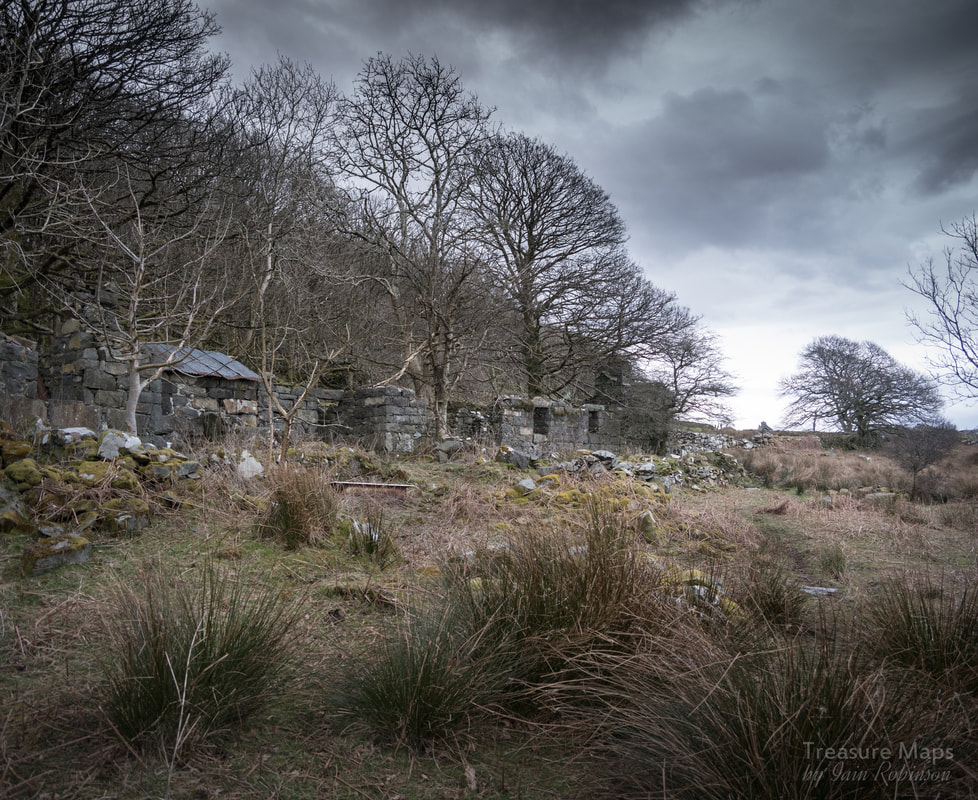 Tai -newyddion, from the west.
The footpath splits here, one arm going north east, towards a charming old ruin called Craig Bryn-derwog (rock of the oak woods). This seems much earlier and backs closely onto the woods, as you might expect. The construction matches the examples at Cil Drygwr and I feel it's a reasonable assumption that this is the same age. The path wanders off into the woodland through a gate. The place is quite magical, trees (mostly oaks) in tortured shapes twist around some fantastic rock formations. 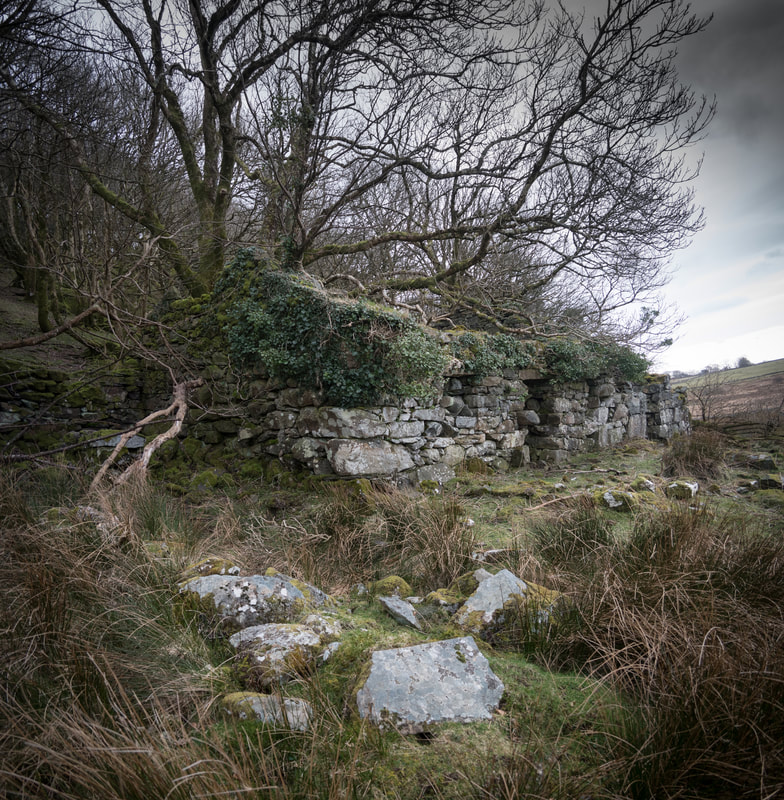 The good news is that all these atmospheric ruins are on or nearby to a public footpath (llwybr cyhoeddus). There are two approaches. One starts from Bryncir home farm. Like many Welsh footpaths, these are not marked and you really have to be armed with an OS map that shows the paths, preferably a 1:25000 edition. Going from the farm, the way passes through the farmyard, past a kennels for hunting dogs.  When we passed, they set up a terrible wailing and barking that lasted for a good 15 minutes, destroying the peace and the sounds of wildlife.

​If you don't fancy this, you can take a slightly overgrown path that goes north of the farm between some very pesky bamboo and rhododendron and along some built up levees. It then turns right along a woodland boundary and into the woods under the escarpment. Both paths end up at Craig Bryn-derwog. There are absolutely no signs that you are on a right of way, but trust me, you are. As if confirmation were needed, the stile in the estate wall before Pen-y-Clogwyn is a reassuring sight. 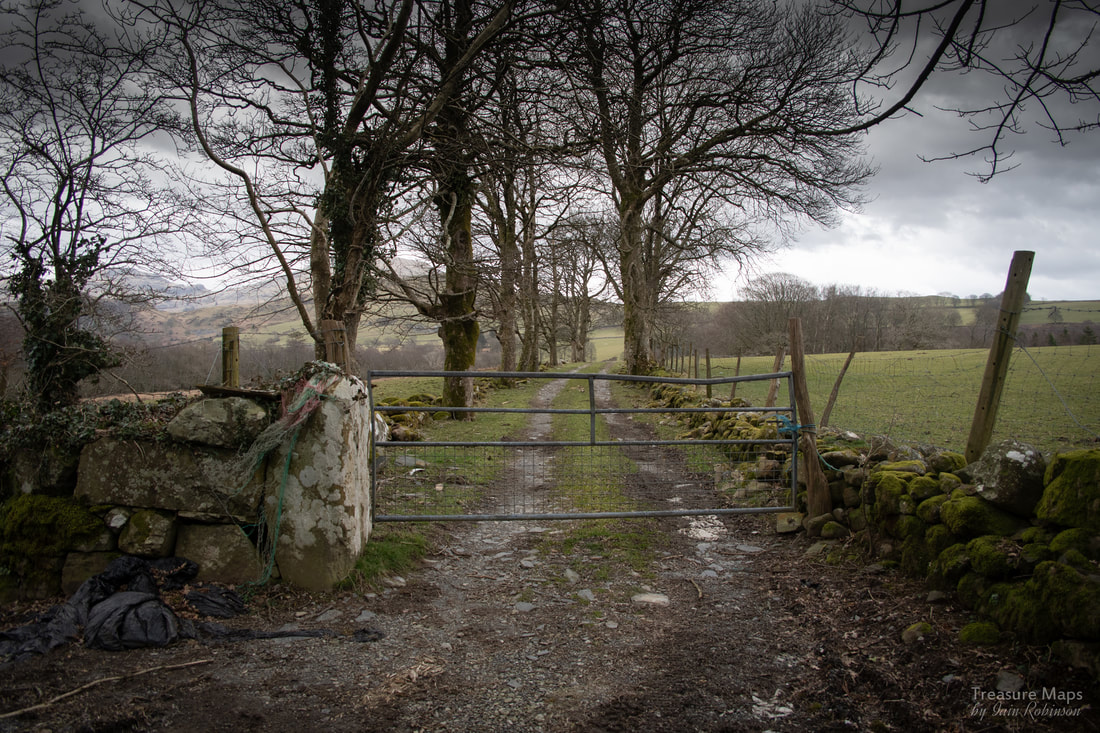 The start of the footpath across from the Outdoor Pursuits Centre, slightly north of the Bryncir Home Farm.
A slightly longer route is to start from Ty Mawr, taking the farm track at Bryn-y-Werglodd to Waen, then taking the upper track to a field barn. There is a sign along here that it is a permissive path, which means that you are here on sufferance, and the landowner can change the route or decide to chuck you off at any time. But you are here, and you can carry on to your destination, undeterred.  After some soggy moments at field gates, you should arrive at Cil Drygwr.
Both Cwmystradllyn and Cwm Pennant are notorious for their lack of car parking and absence of public transport of any kind. There is a space near the slate mill at Ty Mawr, and another small space by the junction below Plas Bryncir. We usually park near the Lodge Bridge at Bryncir, but if you decide to have a look at these fascinating ruins, wherever and however you choose to park, please do so considerately. 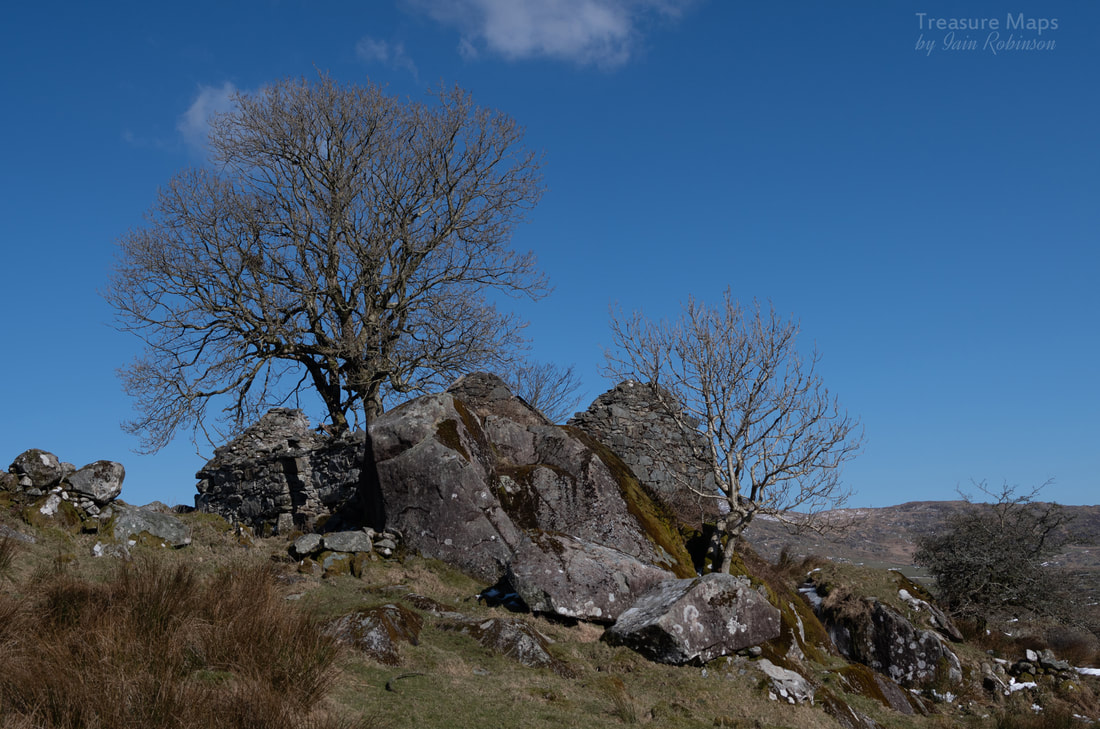 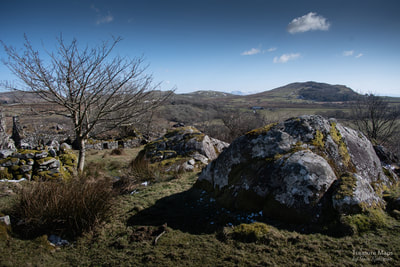 One of the large rocks on top of Cil Drysgwr 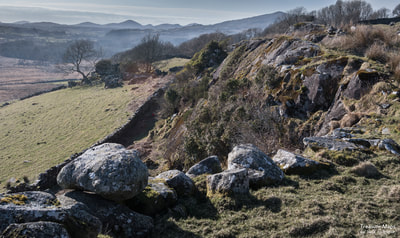 Looking towards Bryncir Tower from the escarpment. 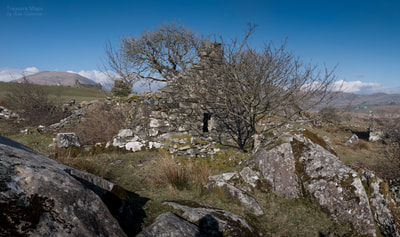 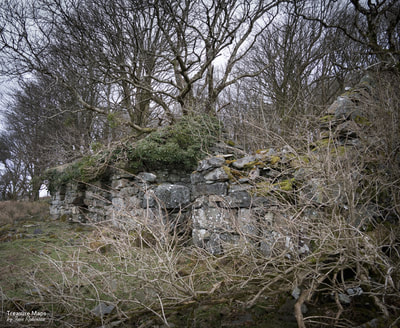 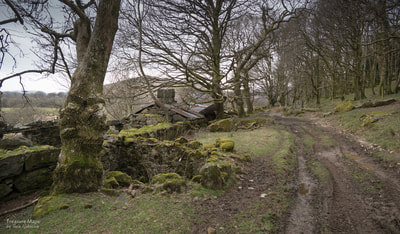 The farm road running to the rear of Tai-newyddion. 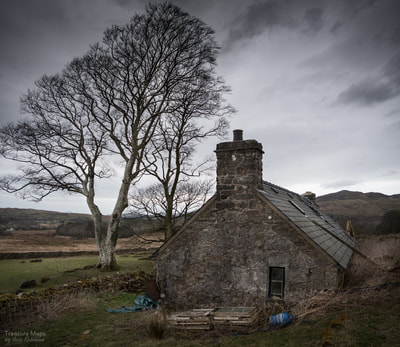 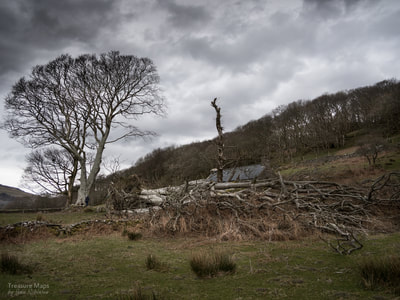 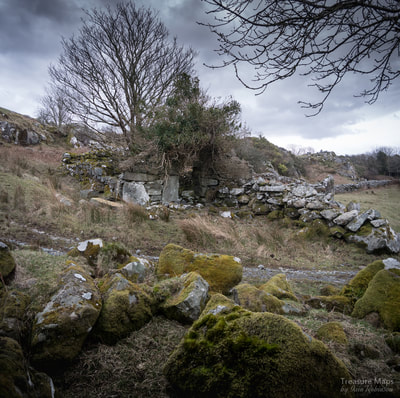 The remains of a barn at Pen-y-Clogwyn. 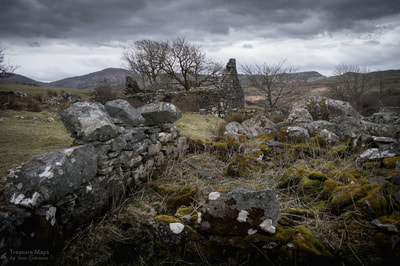 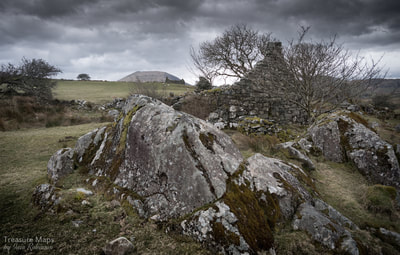 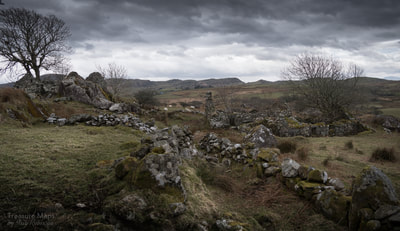 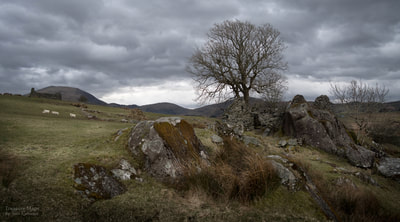 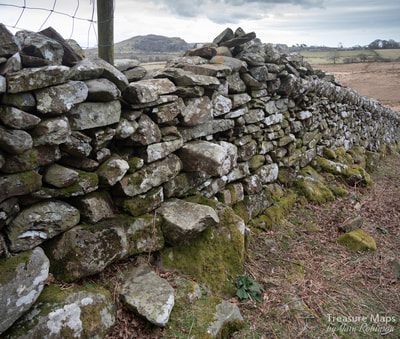 The fine stile in the estate wall. 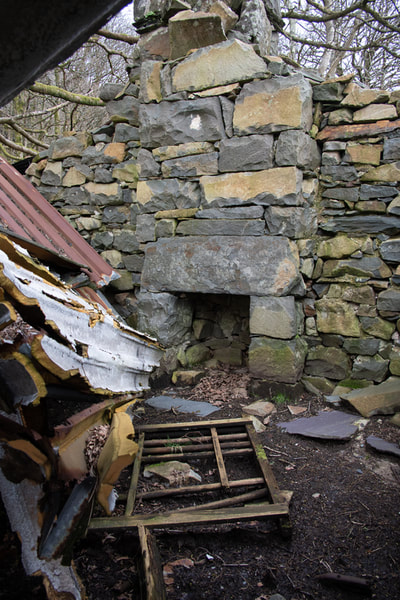 One of the fireplaces inside Tai-newyddion. 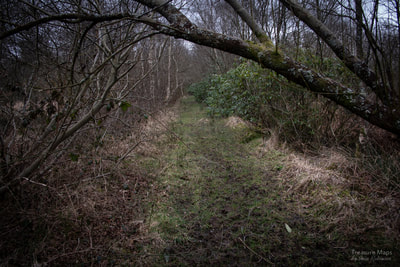 The Bamboo and rhododendron lined footpath beside Bryncir Home farm. 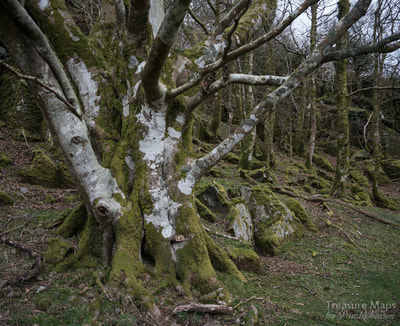 A stunted beech in the woods behind Craig Bryn-derwog 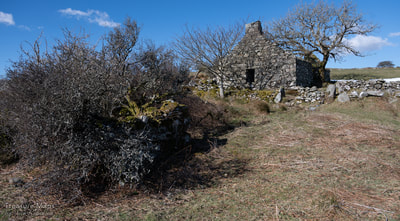 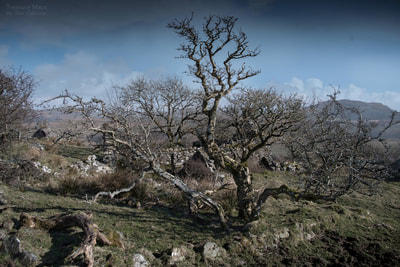 © Iain Robinson and Treasure Maps, 2013-2030. Unauthorized use and/or duplication of this material without express and written permission from this site’s author and/or owner is strictly prohibited. Excerpts and links may be used, provided that full and clear credit is given to Iain Robinson and Treasure Maps with appropriate and specific direction to the original content.

​The depiction of a mine or site does not indicate that access is possible- permission should be sought before entering any private land.
Underground exploration should not be undertaken unless properly equipped and with at least one experienced member of the party.